Skip to content
Chris Sinclair: (902) 872-1131
Facebook page opens in new windowInstagram page opens in new windowYouTube page opens in new window
Frank J. Giacobbe, August 2014
To the Management and Staff at Restigouche River Lodge, Many thanks for an exceptional stay and first rate fishing during my week at the lodge. The accommodations, lodge, friendly staff, and second to none first-rate guide Derring, made my week filled with memories of a lifetime. I was so very fortunate to luck out and land my salmon of a lifetime along with memories that will stay with me for a lifetime as well. I can’t think of any other fishery, like the Restigouche, where a fisherman can be rewarded with the opportunity to experience the thrill to catch and release a fresh silver chrome 35lb Atlantic Salmon while experiencing nature at its best. I look forward to many returns.
Frank J. Giacobbe
Brian Moran, Feather Bay Guiding
Thank you , and holy smokes, a spectacular season with such beautiful atlantics, sport of kings… one day, when my girls get big enough, we will come and see you, meanwhile thank you for your updates, I can hear the river when I see your pics.
All the best Brian Moran, Feather Bay Guiding 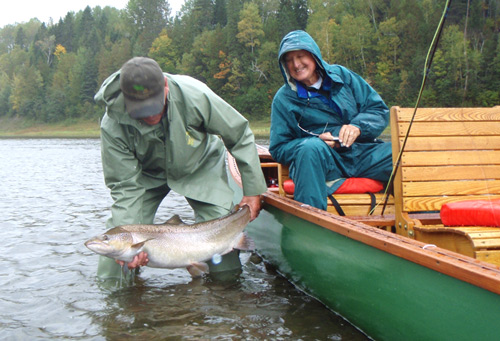 Hello Bill, I want to express my sincere thanks and incredulity for the wonderful experience that my father and I shared at Restigouche River Lodge (RRL) last weekend.  We were scheduled for 4 “beats” over three days thanks to RRL’s generous donation of a trip to the Atlantic Salmon Federation for their auction in Freeport, Maine last winter.  I was hoping that my father would manage to tie into a grilse, or at best, that we would tie into a salmon.  I did not expect that we would, collectively, land three salmon, and that both my father and I would land 30 pound salmon.  Aside from the fishing, the lodge and staff were wonderful. We ate too much good food (thank you, Lana) and Deering is 100% responsible for our hooking and landing three wonder salmon (the third was a “little” 12-pounder that my dad warmed up on).  I am not disappointed that my father didn’t get a grilse. I came home to Maine to a visit from a friend with who I regularly fish with in Labrador; words cannot express his response to our success at RRL.

Rob Tartaglia, Rhode Island
I met with the owners of this lodge at a local fishing show and I have to say they were genuine, passionate and proud of what they built on the Restigouche and an absolute pleasure to speak to !

Ned Morris
“Was one of the most magical fishing experiences of my life and I didn’t even catch a fish! To experience the Restigouche River I would akin to going to the Vatican. I told Keith V. it was an honor to be able to fish there and to see a 30 lb Atlantic Salmon swim by me was enough. Also the people I met (Greg being one of them) forged friendships that would last a lifetime. To me….I got a hell of a deal and a real bargain.”

Ashley Rae-http://www.shelovestofish.com
“First stop on our trip while filming Fly Nation TV was the Restigouche River Lodge on the Restigouche River. The river flows in the north-west of New Brunswick and in the south-east of Quebec. It was the clearest water I’ve ever seen in my life, and is surrounded by rolling hills, evergreens, wildlife, and is filled with Atlantic salmon. We were welcomed by the staff, unpacked and then went fishing! What a start! 🙂 The Restigouge River Lodge was a great start to an amazing trip. Wake up, eat, fish, eat, fish, eat, sleep and repeat! What could be better? The food was fantastic and we had each meal at a big dinner table with some of the staff, and other guests where we told our fishing stories from the day, and aside from fishing that was one of my favourite parts about being there! We got to know each other and laughed until our sides hurt. I slept like a baby each night! Thank you to everyone at the RRL for a memory that will last a lifetime!” 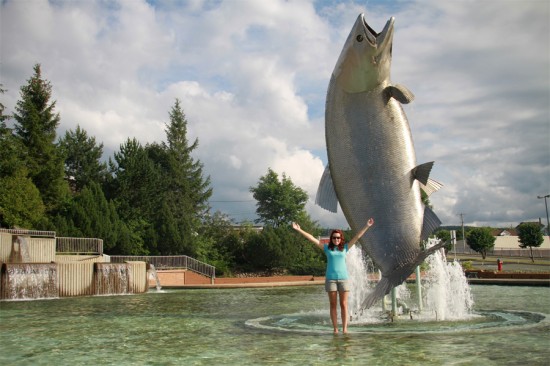 “Bill, Thanks for the tip about John Harvell at Ace Rentacar in Presque Isle.  Not only has he set me up with a good car at a good rate but also he has helped me find discounted motel reservations in Presque Isle.  He is serving your clients very well.  I hope you continue to recommend him.”

A letter from Steve Buckley, Steve will be joining us again in 2014 along with his grandson, way to go grandpa!!!

Every once in a while a new fly—or a fly you have not seen before—catches your eye. There’s something about it that says, “I’ve got real possibilities.”   In mid-June, 2012, I was preparing for my first visit to the Restigouche River Lodge.  With only two weeks left before my trip, I was fully immersed in everything salmon.  River reports.  Rainfall reports.  Salmon blogs.  Checking and re-checking my equipment. It was then that I came across the Bonnie Belle.

In his regular updates on Miramichi fishing, Keith Wilson claimed that a new fly was the top producer at his camp.  As soon as I saw the picture, I liked the fly.  It is green and black which are great colors on the Miramichi and most other salmon rivers.  It is reminiscent of the Green Widow, the Green Widow and the Glitter Bear.  The fly was created by Doug Hintzman.  Tied on a double hook with black thread, the tag is gold holographic tinsel and the body is green holographic mylar.  Hintzman uses black rabbit fur for the wing because it is fine and works well in the water.  I use black squirrel tail, which has similar properties.  There are two strands of green krystal flash on either side of the wing.  The hackle is a Kelly green collar, wrapped three times, and jungle cock cheeks are added to finish off the fly.  There is an online video of Hintzman tying the fly at: http://www.youtube.com/watch?v=NNibqvUl5GY. I have added a counter rib of fine gold wire on the body because the mylar is easily cut by a fish’s teeth or by forceps removing the fly.

I fished the first week of July in 2012.  The fishing had been fairly slow up to that point, and it turned out that 2012 was a slow year.  It was very slow compared to 2011 and 2013.  On a hunch, when I got to the lodge, I started out with a Bonnie Belle.  It turned out that my intuition was right.  During that week, I hooked 10 fish—nine of them on the Bonnie Belle.  My only problem was that I had tied only a few.  Most were torn up.  I gave one to Deering Irvine and another to a guest I was fishing with.  And then I was empty.

I have one other go-to fly for the Restigouche.  This fly has been around awhile, and I knew about it.  It is just that I had never fished it.  I “discovered” it by reading the log book at the lodge.  It was mentioned frequently enough that I assumed it had to be effective.  The Picasse was invented by Marc LeBlanc, a well-known guide and fly tier on the Bonaventure River.  Marc is said to have developed this to be a “guide fly,” one that is easy to tie and durable enough to withstand both teeth and forceps. The original Picasse is tied with black thread for an underbody.  The body is either clear or black vinyl.  There is no tag or tail.  The wing is black bucktail over yellow bucktail—1/3 black and 2/3 yellow.  There is a collar of blue eared pheasant.  Cheeks are Lady Amherst tippet and Jungle Cock.

The Picasse is reputed to be a terrific early season fly when tied spey style for high water.  I can attest that it works fine in normal water, too.  Last season, I took a 25# fish from Ledges on a #6 Picasse.

As I prepare for this season, lots of Bonnie Belles and Picasses are coming out of the vise.

Bill Guditus
“Kevin thanks for saying hello at the camp last week. The fellow I brought with me landed a 22 pound bright male in the last half hour of fishing at home pool on a 13’ Hardy Swift that we had stuck in his hand for our 4 day stay. First Salmon trip, first fly fishing trip, etc. The Lodge is just Grand and the people are terrific and you all should be very proud.
Cheers,
Bill Guditus”

Richard and Doris Billings | Hampton, Jew Jersey
“Kathy, had to let you know what a fantastic week Dick and I had. There isn’t anyplace that could equal or be better than the Restigouche Lodge.  As soon as we arrived home yesterday Dick was on the phone to some members of his fishing club telling them how great it was. Give our best to all and thank them for what they did to make the week outstanding.   My only regret is that I have to start cooking again!!!
Sincerely, Doris”

Brian Landquist | Fort Drum, New York
“Had an awesome time fishing at your Lodge!!! Thank you very much!!!” 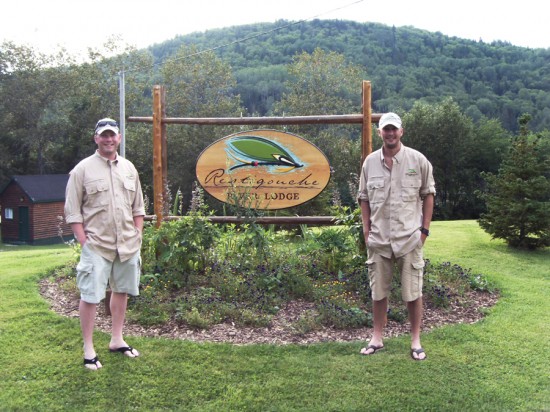 Fred Moy, PhD | Valhalla, New York
“What an amazing place to cast a fly to a salmon!  The ambiance of the Restigouche River is almost mystical.  And then there are the challenging fish, plus the wonderful service and enthusiasm of Kathy and her staff.  Deering was an excellent guide and we managed four salmon during the week, including one twenty-five pound male on the last day of the season on the Gaspe .  I will definitely return and hopefully will make this a yearly pilgrimage.”

Marcel Pica
“This September, I had a chance to fish at the Restigouche River Lodge with my fishing partner, Martin. The lodge was easy to find and is situated along the river bank. It offers spectacular views of the Restigouche from the main lodge porch, which soon became a favorite spot for early-morning coffee. The facility has everything you could need on a fishing vacation and offers comfortable lodging that makes visitors feel at home as soon as they arrive. The staff is accommodating, and the guides know the river well and are there to help you have the best fishing experience possible. Access to the fishing pools is easy and pleasurable from either canoes or by wading. I was treated to some of the best fall fishing I have ever experienced. We were fortunate to catch and release a number of beautiful salmon in the range of 15 to 20 pounds as well as a few large fall males weighing up to 30 pounds. This is certainly a fishing destination that I will look forward to revisiting.” 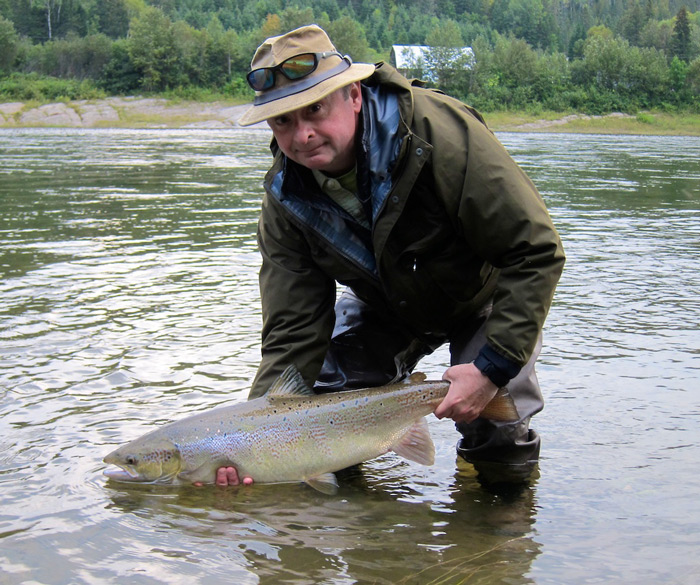