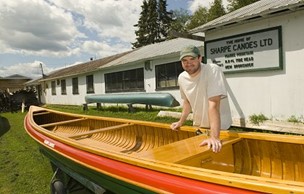 About Our Canoes
Upriver, along the Restigouche, past Tide Head, Flatlands and Island View; just past where the Matapedia breaks into the fast-flowing Restigouche as it carves its way through the Appalachians, is a rambling collection of workshops known as Sharpe Canoes – easily the world’s most famous makers of Restigouche River canoes. These are the sleek giants of the canoe world – works of art reaching 8.5 m (28 ft.) in length. Fishers and their guides along the Restigouche have been using a version of this canoe for over a hundred years. Plenty of time for tradition and pride to take hold.

Barry Sharpe knows about tradition and pride. It runs in his blood. His grandfather Raymond started building canoes in 1947 as a hobby, which “exploded into a business” as Barry says. A few years later, Raymond called Barry’s father, Doug, back from Ontario to help out, and then when Barry finished high school, it was his turn. It wasn’t long before he was bending steam-softened cedar ribs around the moulds that Raymond and Doug had designed.

As a youth, Barry was always on the river, sometimes running it late into the year. One December he had six inches of ice clinging to his canoe. Not exactly smooth sailing. Now he gets out twice a year. Building canoes for clients (as far away as Ireland and the southern United States) takes up all his time, and that of his crew. But he doesn’t seem to mind, “We are keeping a tradition alive,” he says, “people know us by the work we do and I take a lot of pride in that.” Well known, without a doubt; even the venerable Restigouche Salmon Club, founded in the 1880s, uses nothing but Sharpe canoes. Hockey legend Bobby Orr owns one, and President Jimmy Carter has fished the Restigouche in one. 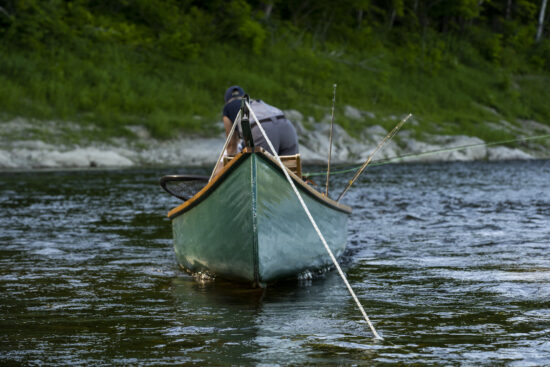 At 250 pounds or more, a Restigouche canoe isn’t for portaging or paddling. “These canoes are very stable,” says Barry. “You could walk on the gunwales and they wouldn’t tip over,” but he did add, try it “only if you have a good sense of balance.” Perfect if you want to stand up and cast into a favoured salmon pool. Add sponsons to the mix (floatation devices that attach just below the gunwales), and you can’t sink them. Throw on a motor and there you have it, a canoe that can carry between one and two tons of gear, makes a perfect fishing platform, and glides over the shallows.

In Barry’s grandfather’s day, word of mouth kept the shop going. The shop “where the walls were insulated with wood shavings and the floor was so drafty that your feet froze no matter how much wood you burned.” That meant winter shutdowns, but now, with a new high-ceiling workshop (Barry is tall and kept banging his head in the old one), they want to work year round crafting up to 45 canoes. That means actively searching out new markets and working on new designs.

But in the end it’s not about mass production – each boat is still built in much the same way as it was in Raymond’s day: hand crafted with local materials for specific buyers. The tools may have changed, the shop may be a little bigger – the ceiling is certainly higher, but the traditions that guide Barry are the same ones that were followed by his grandfather, Raymond, on the first Sharpe Canoe built way back in 1947.