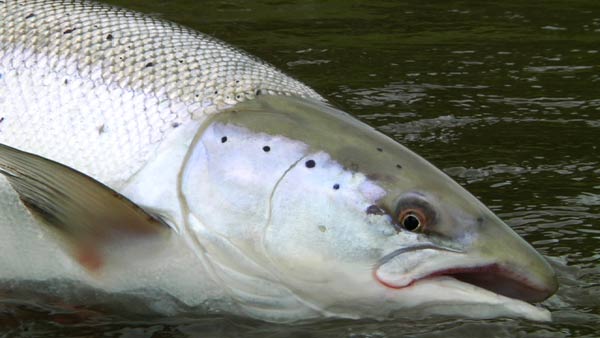 In New Brunswick mature Atlantic salmon are protected from feeling the club. Grilse are still on the meal table as of now, and that’s a topic for another discussion. With our camp being in New Brunswick I guess you could say we should mind our own business. But if we all go about minding are own business, the Atlantic salmon that we all love will one day disappear. Getting to my point on why we don’t kill Atlantic salmon, here are some of the reasons. The first and most important reason it to preserve the species itself and protect the gene pools of the different rivers that still have runs of salmon. Not to mention that the increase numbers would provide better fishing, here is the number one reason from and anglers prospective. All Atlantic salmon anglers dream of landing a thirty pound plus salmon. To reach the thirty pound plus mark the salmon has to make many runs to and from the ocean, with all the pitfalls on its journey the one they can sure do without is being bonked upon reaching their river. So here is the greedy reason not to take fish, as we keep taking out the tens, fifteens and twenties out of the population where then will, the thirties and forties come from. Let’s practice being pigs and releasing all salmon so we all might feel the tug of one of these magnificent thirty or forty pound Atlantics.