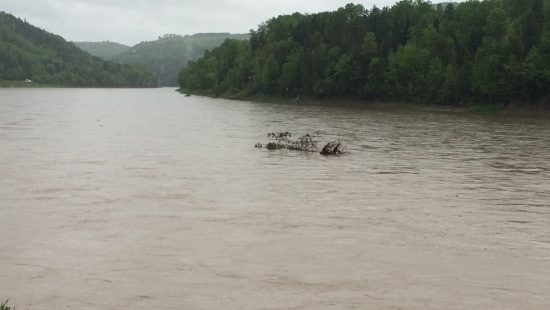 During the early spring season and through the month of June, there are times a large weather system brings a huge rise of water to an Atlantic salmon river. On many rivers salmon anglers become totally distraught, “oh no the river is blown out, our trip is ruined it will take at least a week for the river to clear” This might be the case for many salmon rivers, however on the stretch of water at the Restigouche River Lodge the opposite rings true. From our past experiences with the Restigouche gone wild, the battle cry is “here they come.” Atlantic salmon are staging in the brackish water at the edge of the salt. Prime condition Atlantic’s just waiting to taste a big flow of fresh water from their river. This huge flow of water carries fallen trees, root balls and an assortment from the banks of the river. This river “junk” gets out in a day or so making the river safe for fishing, then it’s hit the water boys. It is a well-known fact that Atlantic’s don’t like “the tea water” found on most salmon rivers receiving a big fun off. Water that has been fermenting in bogs over winter just isn’t appealing to the Atlantic salmon’s construction. The sulking fish will lay low for some time until the water clears. In most rivers the flow is way too turbulent and fish duck and hide. The Restigouche’s runoff is a clay base that the fish have no objection to. Our wide section of the river affords salmon fine resting spots where they take readily.

Of course we all need proof, so take a look at the Seasons on the Fly episode ‘”An Atlantic Salmon Dream” You can view this episode on our website https://www.restigouchelodge.com/videos. Just ask any one of the anglers from last season who had the same scenario play out to their delight.

As the 2017 Atlantic salmon season approaches we at the Restigouche River Lodge are looking forward to, one blown out river!