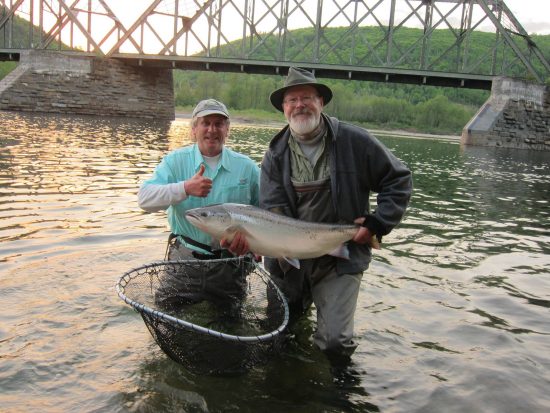 Paul with a Birthday salmon

From the arrival of the first explores to North America through the present day the Restigouche River has kept a low profile. Throughout the last century this river has managed to stay out of the public eye. Many Atlantic Salmon Rivers receive a great deal notoriety from open public water and accessibility through many bookable lodges.

How has the Restigouche River been able to maintain and keep her low profile? Many salmon angles know of this river, they just have not had the opportunity to wet their waders in her. The reason, accessibility! Canada’s Atlantic Maritime with her bountiful Atlantic salmon Rivers have been a haven for anglers for well over 100 years. Some rivers have a large base of anglers and others managing to keep their obscurity.

The Restigouche and her Atlantic salmon, were chosen by a few of the world’s wealthiest individuals during the industrial age, as their river. They were powerful men who presided over the Railroad, Automotive and Steel industries. Leaders of Oil, Shipping, Lumber and the Financial and Banking Magnates. These gentlemen purchased or acquired leases and built their salmon camps on this river. In a blink of an eye this river was totally private available only to the chosen few and their guests. Just what lured these men to this river when other rivers were there for the taking?

What separates the Restigouche from many other rivers is the size of her salmon. World class Atlantic salmon of 30 through 40 pounds and larger are in the Restigouche every season. Atlantic salmon are unique to every river they come from with the characteristics of their genes evolving over millions of years. Despite all the theory’s we don’t know why this fish developed so differently in so many rivers, they just did. The Restigouche “a big fish salmon river” so she is!

On the Restigouche the run of Atlantic salmon starts early, mid-May with the arrival of the “Big Hens.” Yes ladies and gents, this is the place to get your thirty plus Atlantic salmon. Big Atlantic’s are landed each season by RRL guests from early on into mid-July. Through the spring and prime weeks salmon are taken swinging sub-surface flies generating violent takes! As the summer rolls on the fish take a liking to floating big bombers over them. Great fishing can be had through late August till the end of the season. Fall Atlantic’s full of color and fight, willing to take bombers and wets with a vengeance.

Get connected with an Atlantic salmon, “the king of game fish” Salmo Salar, “the leaper” This challenge is there waiting for you on the Restigouche River.