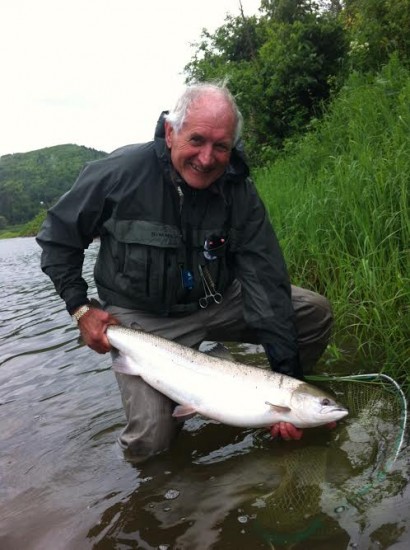 Hurricane Arthur provided all the fireworks for Canada Day and the Fourth of July in 2014. Arriving to the Canadian Maritimes with a big bang the storm kept most of the outdoor activities to a minimum. Arthur really whipped up the Restigouche River and on a time of the season when you would expect beautiful warm weather Mother Nature gave us the big chill. Winds took down one of the RRL flag poles, a large tree along with many huge limbs around the grounds.

In camp during this week was a fine chap, Roger Urwin from across the pond. Roger, who comes from England might have been raised on rainy, cold weather but not this. Other sports came in quickly as the storm started to rage, not so for Roger and his guide Matty. The two braved the powerful winds, rough water and frigid temperatures, oh boy was it cold.

The determined sport and guide fought all the punishment Arthur could dish out that evening. Despite the least likely salmon taking conditions this fellow managed one fine Atlantic salmon that evening. The two came in cold and wet with big smiles on their faces.

I think we would be hard pressed to find another Atlantic salmon angler that could tell such a story. The RRL hats come off to Roger Urwin one determined fly fisherman with an Atlantic salmon and a hurricane to remember.

Cheers Roger, you sure know how to play the game!