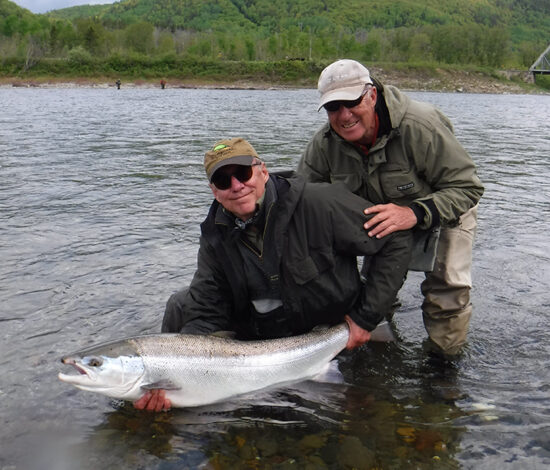 It is with the deepest sorrow that we have to report the very sad news of the passing of Michael French. Mike, “Frenchie” had just joined the Restigouche River Lodge guide team only a couple of seasons ago. In addition to losing a wonderful fellow the Atlantic salmon world has also lost one of the very best guides. It did not take long for Frenchie to learn the Restigouche River and I am sure he related all of his many seasons of guiding on the Saint John to his new river, The Restigouche. Michael loved being on the river. I know he was happy settling in at the lodge where he could feed his passion for Atlantic salmon fishing and guiding. He was in his glory while being on a big river fishing or guiding. Woods and water, bird dogs and Atlantic salmon, this was his world, with an occasional trip to the Far East! Frenchie could get you a fish, a big fish, as can be confirmed by his RRL sports. A joyful and knowledgeable conversationalist, in addition to his great guiding skills, our few guests were very fortunate to have spent a day on the Restigouche with Mike. Such a delightful and easy going man, I will miss Michael immensely, as I am sure will the partners, staff and guests of the Restigouche River Lodge. In closing this sad note, I would just like to think that Frenchie, while passing in his sleep, was in the mist of dreaming of a big salmon on!