[youtube width=”600″ height=”350″]https://youtu.be/Z8t6BDtOUPo[/youtube]Ice Runs on the Restigouche It took a warm afternoon on Tuesday, April 24 to finally get the ice moving on the Restigouche River. Although the ice and heavy snow pack has hung around late this season, it might just mean an easier transition to great early fishing conditions. Normally when the ice goes out the shore is solid with walls of ice bordering the river. We have had a slow melt eroding the ice from underneath and not a huge raise of water lifting and busting free the river’s ice. With the river covered in a deep blanket of snow, it has aided in a gradual controlled melt. The slow melt has moved the calendar date for the ice out and with that comes warmer temperatures. Warmer weather means little ice damming and hopefully no flooding. We will just have to wait and see what else Mother Nature has in store for the Restigouche River this spring.

The ice run on the Restigouche annually prepares the river for the onslaught from the sea. With the river running fee, smelt begin to enter on their spring spawning run. Only a few schools at first, followed by swarms of the six inch silvery fish. Spawning conditions are great on the lower sections of the Restigouche, smelt with their bronze backs form visual clouds of these fish throughout the RRL water. 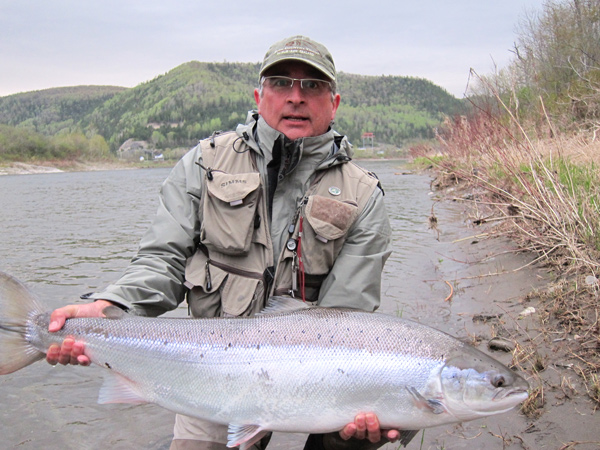 RRL partner Patrick with his first Restigouche salmon a few years ago.

It’s just how nature works, as the smelt move in the Kelt’s drop down for their spring time feed. Last season’s salmon having remained in the river over winter are now looking for their first meal since entering the river last spring. The smelt run is critical for the Atlantic salmon’s survival, gorging themselves with this abundance of protein the “blacks” recondition quickly. Gaining weight and silvering up they will soon return to the ocean and a three year salty vacation. The smolt, Atlantic salmon smolt that are going to the sea for the first time join the migration, it is said that the kelt’s show the way to the feeding grounds for these first trimers.

Now as these sea bound Atlantic’s clear the river it’s time for “the biggens” to appear. First come the ladies followed by the gent’s a few weeks later. Atlantic Salmon Rivers have their own unique gene pool and the Restigouche is one of the few big fish rivers. These ladies of the Restigouche don’t mind their waist lines, developing huge girths, neglecting their diets and eating everything on their salt water table.