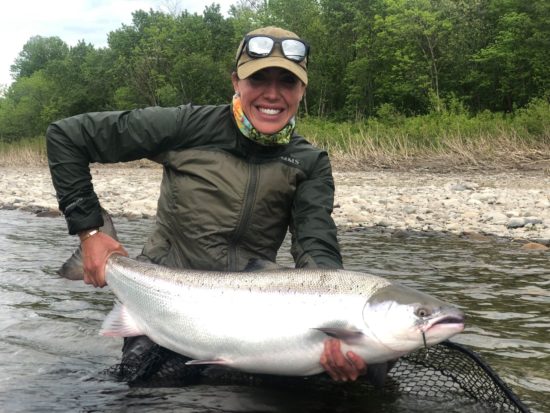 Colin Huff and Emily Rodger came in to the Restigouche River Lodge for a couple of days on the Restigouche River. Due to Coronavirus, they had to stay on the Quebec side and fish with Rodney, one of our Quebec guides. This virus has made things very difficult for the lodge and our staff. Well the two anglers took advantage of all the river could offer for those two days. Colin had shots on a few fish, lost a massive salmon and landed a 33 pound Atlantic. Emily also lost a very large fish and had action from other salmon.

The two could just not get enough of the Restigouche and decided to extend their trip for a half day before heading home. “Good Move” as Emily, a proficient lady angler hooked into
another lady of the aquatic version! The two went on to fighting, Emily who hooked this Atlantic salmon in our Adams Pool, was now into to a fly fishing fight of a lifetime. The two ladies tangled for some time in the pool, then the hen fish decided to take Emily for a ride. 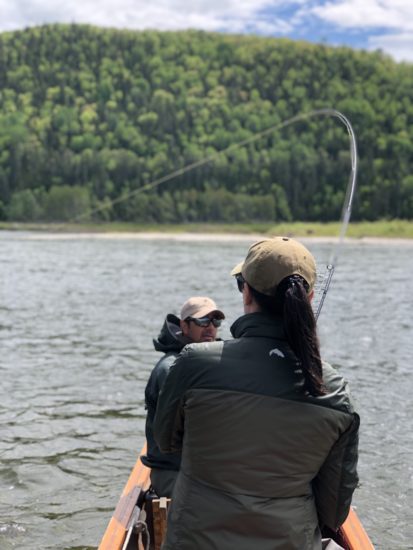 The fight featured many perils, getting a jammed fly line early in the battle to the salmon taking Emily into every river soaked bunch of alders on their way down river. As the two continued the fight way down river the fish showed Emily just how powerful Atlantic salmon are. Up and down the river they battled, when the salmon decided to head for home, her salt home. First it was under the railroad bridge, with Emily keeping the fish mid-river while guiding the salmon and herself through the bridge abutments. Now the salmon was headed for the second bridge! Emily navigated the hen through this next obstacle, and then the two girls finished their fight along Bell Island, a good way down river. Emily brought the salmon to a fine landing spot and Rodney was quick with the net. Both the fish and Emily had given all they had, but it was Emily who won the fight with this magnificent lady Atlantic salmon! The salmon was in great shape when she was released back into the Restigouche River. A fish of a lifetime and a fight for the ages! 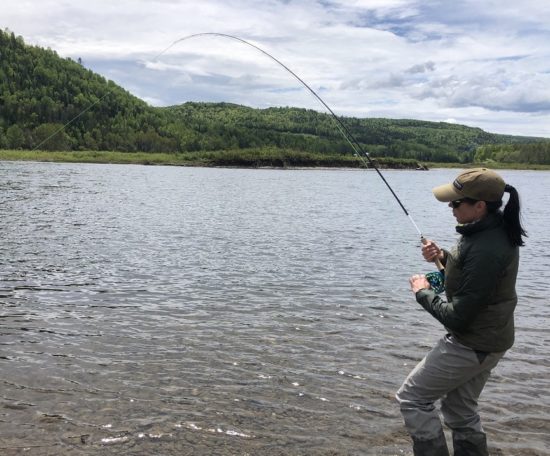 Needless to say Emily’s name and her salmon will go into the RRL log book, we will leave a space for her when she returns. Along with that, she is now in our thirty pound club and will have her name plate made to go on our 30lb club, wall plaque. The Restigouche River Lodge is delighted to congratulate Emily on a job well done and becoming a member of this fraternity of anglers. Speaking to Colin I asked him if that smile was still on her face, “it is and I don’t think it is going anywhere any time soon” 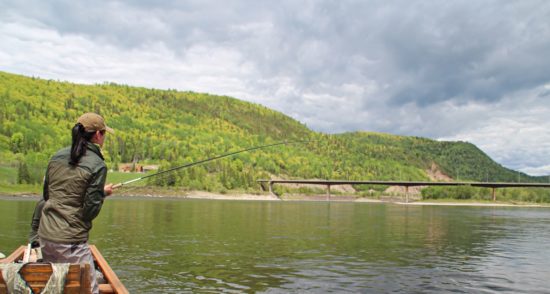 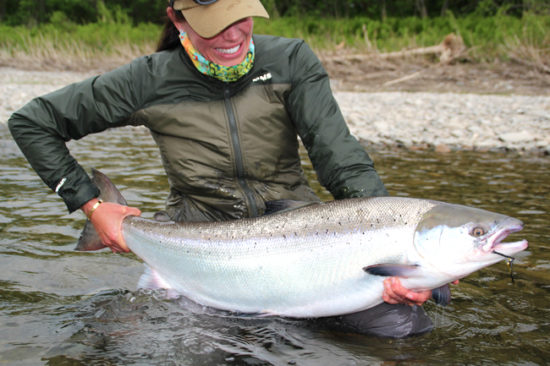